In which we introduce the theory of duality in linear programming.

1. The Dual of Linear Program

Suppose that we have the following linear program in maximization standard form: 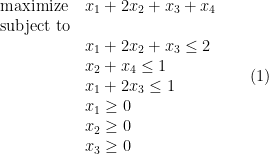 and that an LP-solver has found for us the solution

. How can we convince ourselves, or another user, that the solution is indeed optimal, without having to trace the steps of the computation of the algorithm?

Observe that if we have two valid inequalities

then we can deduce that the inequality

(derived by “summing the left hand sides and the right hand sides” of our original inequalities) is also true. In fact, we can also scale the inequalities by a positive multiplicative factor before adding them up, so for every non-negative values

Going back to our linear program (1), we see that if we scale the first inequality by

, add the second inequality, and then add the third inequality scaled by

, we get that, for every

And so, for every feasible

meaning that a solution of cost

In general, how do we find a good choice of scaling factors for the inequalities, and what kind of upper bounds can we prove to the optimum?

Suppose that we have a maximization linear program in standard form. 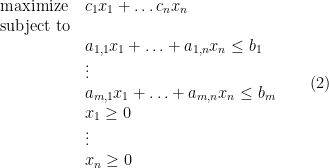 For every choice of non-negative scaling factors

, we can derive the inequality

which is true for every feasible solution

to the linear program (2). We can rewrite the inequality as

So we get that a certain linear function of the

is always at most a certain value, for every feasible

. The trick is now to choose the

so that the linear function of the

. We can achieve this if we choose the

Now we see that for every non-negative

that satisfies (3), and for every

Clearly, we want to find the non-negative values

such that the above upper bound is as strong as possible, that is we want to 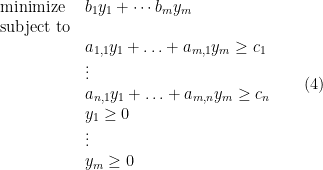 How do we do the same thing but starting from a minimization linear program?

in an equivalent way as

If we compute the dual of the above program we get

So we can form the dual of a linear program in minimization normal form in the same way in which we formed the dual in the maximization case:

We have already proved the following:

Which we can generalize a little

is a linear program in maximization standard form,

is a linear program in minimization standard form, and

are duals of each other then:

are both feasible, then they have to both be bounded, because every feasible solution to

gives a finite upper bound to the optimum of

(which then cannot be

) and every feasible solution to

gives a finite lower bound to the optimum of

(which then cannot be

What is surprising is that, for bounded and feasible linear programs, there is always a dual solution that certifies the exact value of the optimum.

Theorem 5 (Strong Duality) If either

is feasible and bounded, then so is the other, and

To summarize, the following cases can arise:

We will return to the Strong Duality Theorem, and discuss its proof, later in the course.