In which we use the SDP relaxation of the infinity-to-one norm and Grothendieck inequality to give an approximation reconstruction of the stochastic block model.

1. A Brief Review of the Model

First, let’s briefly review the model. We have a random graph

with an unknown partition of the vertices into two equal parts

. Edges across the partition are generated independently with probability

, and edges inside the partition are generated independently with probability

. To abbreviate the notation, we let

, which is the average internal degree, and

, which is the average external degree. Intuitively, the closer are

, the more difficult it is to reconstruct the partition. We assume

, although there are also similar results in the complementary model where

so that the graph is not almost empty.

We will prove the following two results, the first of which will be proved using Grothendieck inequality.

, there also exists a constant

, then it will be impossible to reconstruct the partition even if an

fraction of misclassified vertices is allowed. Also, the constant

will go to infinity as

goes to 0, so if we want more and more accuracy,

needs to be a bigger and bigger constant times

. When the constant becomes

, we will get an exact reconstruction as stated in the second result.

Our algorithm will be based on semi-definite programming. Intuitively, the problem of reconstructing the partition is essentially the same as min-bisection problem, which is to find a balanced cut with the fewest edges. This is because the balanced cut with the fewest expected edges is exactly our hidden cut. Unfortunately, the min-bisection problem is

Our algorithm will be as follows.

Ideally, we want half of the

will be a rank-one matrix and

, which is the indicator vector of the hidden cut, will be its eigenvector with eigenvalue

. The remaining eigenvalues of

will be all zeros. So finding the largest eigenvector of

will reveal the hidden cut. In reality, if

, then the unique optimal solution of the SDP will be the combinatorial solution of min-bisection problem, that is, in the vector language, the one-dimensional solution.\footnote{“A miracle”, said Luca.}

3. Analysis of the Algorithm

First, we rearrange the SDP to make it slightly simpler. We have the following SDP:

We note that SDP1 and SDP2 have the same optimal solution, because the cost function of SDP1 is 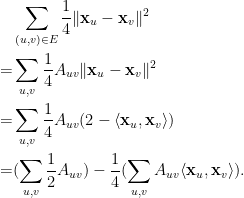 The first term is a constant and the second is the cost function of SDP2 with a factor of -1/4.

Now, consider the cost of SDP2 of

The expected cost will be

Since each edge is chosen independently, with high probability our cost will be at least

, which implies that the optimal solution of SDP2 will be at least

be the optimal solution of the SDP, then we have

In the last equality we used the fact that

When we used the spectral method last week, we said that the largest eigenvalue of

is the average degree. This is because the hidden cut will give us a vector with large Rayleigh quotient. But

has a relatively small spectral norm, so everything should come from

Recall that the SDP norm of a matrix

is defined to be

, then by Grothendieck inequality we have

We proved in the previous lecture that

with high probability, so we know that the SDP norm

with high probability as well. By definition, this means

Substracting 3 from 3, we obtain

is the all-one matrix and

which can be simplified to

For simplicity, in the following analysis the term

is an inner product of two unit vectors. If

should be 1 for almost every pair of

is actually very close to

. Now, we will make this argument robust. To achieve this, we introduce the Frobenius norm of a matrix.

be a matrix. The Frobenius norm of

The following fact is a good exercise.

be a matrix. Then

To see how close are

, we calculate the Frobenius norm of

This gives us a bound on the spectral norm of

be the unit eigenvector of

. We have assumed here that the bound holds for

, but the exact same proof will also work in the other case.}

is a large enough constant then we will have

. Now we have the following standard argument:

The last inequality is because every

will contribute at least 1 in the sum

. This shows that our algorithm will misclassify at most