is a function, then we define the Feistel permutation

be a pseudorandom function, we define the following function

are four functions, then

is the same as the above construction but using the functions

is an oracle algorithm, we define as

the probabilistic process in which we run a simulation of

in which we reply to each query with a random answer.

The proof of the following result is what was missing from yesterday’s analysis.

Lemma 1 For every non-repeating algorithm

Proof: The transcript of

‘s computation consists of all the oracle queries made by

represents a query to the

is a query made to the

consists of all valid transcripts for computations where the output of

consists of transcripts in

We write the difference in the probability of

outputting 1 when given oracles

and when given a random oracle as in

as a sum over transcripts in

We split the sum over

into a sum over

and bound both the terms individually. We first handle the simpler case of the sum over

The first equality holds as a transcript obtained by running

. The probability of having a repetition is at most

Bounding the sum over transcripts in

will require looking into the workings of the construction. Fix a transcript

, with the number of queries

can be written as

corresponding to the left and right parts of

th iteration. The output of the construction after iteration

are said to be good for the transcript

do not contain any repetitions. We bound the probability of

by analyzing what happens when

does not repeat queries so we have

as equality together with equation (6) above would yield

. This shows that equation (6) holds only if

. This happens with probability

independently and uniformly at random. Applying the union bound for all pairs

We use a similar argument to bound the probability of

does not repeat queries so we have

as equality together with equation (8) above would yield

. This shows that equation (8) holds only if

, for a fixed string

. This happens with probability

independently and uniformly at random. Applying the union bound for all pairs

Equations (7) and (9) together imply that

. We will show that the probability of obtaining

for a run of

. We calculate the probability of obtaining

over the choice of

The values of the input

are in bijection with pairs

while the values of the output

are in bijection with pairs

These relations imply that

are random functions with range

are distinct because the functions

are good. This makes the occurrence of

independent from the occurrence of

. We conclude that the probability of obtaining the transcript

The probability of obtaining transcript

as every query is answered by an independent random number from 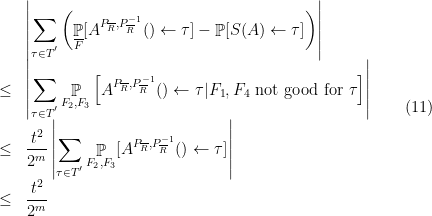 The statement of the lemma follows by adding equations (5) and (11) and using the triangle inequality.

This concludes the analysis of the Luby-Rackoff scheme for constructing pseudorandom permutations from a family of pseudorandom functions.