By virtue of being one or two weeks ahead of the rest of the Western world, Italy has been giving advance notices to other countries about what to expect in the covid19 epidemic. For this reason, friends from other countries have been frequently asking me some questions, whose answers I would like to share.

Will lockdowns work in countries that are not big on rules-following?

Apparently, yes. The number of confirmed cases is not a very reliable signal of what is happening, because it is tied as much to the testing capacity as to the actual diffusion of the infection, while the number of deaths is a more informative one (although read below about some issues with how this number is reported). Schools were closed 34 days ago in Lombardy, which went on lockdown 21 days ago, and all of Italy went on lockdown 19 days ago. For the last several days there has been a slowing down in the number of reported deaths, and daily numbers have been decreasing for the last two days. This is a graph updated today of the cumulative number of deaths:

(Data from Protezione Civile, chart by me)

How does this compare to other places?

This graph shows cumulative number of deaths in NYC and in Lombardy, which have a similar population, shifting the NYC data by 17 days:

(Data from Protezione Civile and NYT, chart by me)

But how bad would things be without restrictive measures?

Some smaller towns in Lombardy, where the virus might have circulated for several weeks before the lockdown, have had substantial increases in all-cause deaths. These go from 4x the usual number over the last three months to 7x the usual number during the first three weeks of March. These excess deaths are more than the number of reported covid19 deaths from such towns, and this should be taken into account when looking at reported mortality in Lombardy. Already, the excess deaths in these small towns account for about 0.7% of the population, suggesting that worst-case scenarios of 2 million deaths in the US and of half a million in the UK without mitigation/containment measures made sense.

The mood in the country seems to be shifting: after all the singing from the balconies, and the baking of cakes, and the practicing of yoga and the posting on Instagram of all of the above, the mood is souring a bit. Unions and employers are at odds on when to reopen factories and many families are living on their savings and wondering how long they can manage to do so. People whose work relates to tourism and hospitality (which accounts for a very large fraction of the country’s GDP) are wondering not just when they will be able to reopen their business or return to their job, but if they will be able to do so.

Because of the way the Euro works, Italy cannot just decide to embark on a massive stimulus program. This is because each state’s budget deficit “creates” Euros, and so there is a common policy in the “Eurozone” that limits each state deficit-spending. While this is being negotiated, the Italian government has committed to 25 billions of extra spending, and there is already a big scramble to lobby for who and how should get various parts of this stimulus program.

What will it be like after the lockdown is lifted?

I am worried that there is no official plan for that.

I hope that there are lots of competent experts working in secret on a plan that takes the best of the contact-tracing and isolation strategies of Korea, Singapore and Taiwan, injects in it the strong tradition of privacy laws that (little known fact) Italy pioneered in Europe even before the GDPR, and creates a wonderfully functioning system.

Hey, once you are hoping, you may as well hope big!

What are good sources for predictions of future scenarios?

Memes! It has been mind-bending how yesterday’s satire becomes tomorrow’s news.

For example, this meme started circulating on March 14, in which Johnson says “because of the coronavirus, we should prepare to lose some of our loved ones,” to which the queen replies “I am sorry for you and your family.” Johnson tested positive two weeks later.

On March 15, the Pope visited a church in (a deserted) central Rome, where there is a crucifix that, according to tradition, survived unscathed a fire in 1519 and, in 1522, was taken around the city and stopped an epidemic of bubonic plague. The pope prayed for the end of the covid19 epidemic.

On March 24, Lercio, the Italian equivalent of The Onion, published an article titled “‘Maybe He didn’t hear me the first time’: Pope Francis asks God again to stop the epidemic”.

Sure enough, on March 27 the Pope prayed again for the end of the epidemic, alone in a deserted Saint Peter square.

The images of the pope walking alone at dusk toward the stage on which he prayed were something no disaster movie had prepared us for. Of course people were able to see the humor in that as well. 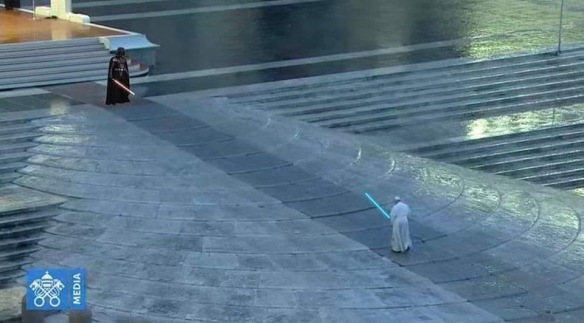 3 thoughts on “Another dispatch from Milan”